Fundamental Asset Management in The Telegraph

Only half IPOs on AIM in 2021 above their listing price 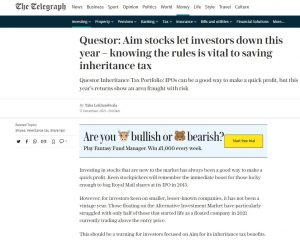 2021 is proving to be the first year since 2014 that Initial public Offerings (‘IPOs’) on London’s AIM market have exceeded cancellations, although our research, which was picked up by The Telegraph’s Questor column, indicates that it’s proved hard for IPO investors to make money investing in AIM’s new arrivals.

You can download the Telegraph article from the link here Fundamental in The Telegraph Dec 21 or, if you have a subscription, read the article online here.

While there has been a material decline in the number of companies on AIM over the past decade, the quality of companies has improved considerably, particularly over recent years, which has driven a strong performance from AIM over this period, significantly outperforming the main UK stock market.

Excluding transfers from the main London market and reverse takeovers, our research suggests there were 60 true IPOs. One of the largest of these was the aptly named Big Technologies (AIM:BIG), which listed in July but saw its shares soar in quick time, lifting its market capitalisation to just over £1 billion by the middle of September. While the shares have fallen back since, they are still up 40% since IPO, with the market capitalisation £807m. Big Technologies public markets experience to date is a lot better than many others.

The shares of only 30 of the new arrivals remain above their IPO price, although there have been some very big winners to encourage IPO investors and our research reveals there is distinct profile to the star performers.

The best performing IPO on AIM in the year to date is 4basebio UK Societas (AIM: 4BB), a specialist life sciences group operating in the field of gene therapies and DNA vaccines. 4basebio joined AIM in February via an introduction (where no new money was raised on IPO), at a share price of 118 pence and market capitalisation of only £14.5m. It hopes to become a market leader in the manufacture and supply of high purity, synthetic DNA for research, therapeutic and pharmacological use. The shares are currently up 408% since IPO, lifting its market value to £74m.

The next best performer in the year was also a new arrival in February. Cornish Metals Inc (AIM:CUSN), is a mineral exploration and development company with projects in Cornwall which had previously been listed on the TSX Venture Exchange in Canada. Its dual listing on AIM raised £8.2m of new money at 7 pence per share which is being used to conduct a drill programme at its United Downs copper-tin project in Cornwall. The project lies within a densely mined district which was the richest copper producing region in Cornwall (and the world) in the 18th and early 19th centuries, and at that time referred to as “the richest square mile on earth” – how times have changed! Shares in Cornish Metals are up over 240% since IPO.

Other top performers in the year to date are Bens Creek Group (AIM:BEN), which operates metallurgical coal mines in West Virginia and whose shares are up 220% since October and Belluscura (AIM:BELL), a medical device developer focused on lightweight and portable oxygen enrichment technology, whose shares have climbed 160%.

It’s noticeable that all the top performers are early-stage companies which are not yet revenue generating and come from either the resources or life sciences sectors.

We are generally reluctant investors at IPO and like to see small companies deliver on public markets before investing. Many companies list after having enjoyed a strong period of growth prior to listing which has often proved tough to sustain. We are also very wary of big insider selling at IPO, notably by founders, which we have seen on several occasion in 2021.

Victorian Plumbing Group (AIM:VIC), the online retailer of over 24,000 bathroom products joined AIM in June in a blaze of glory and a market capitalisation of a whopping £850m. Only £11.8m was raised by the company itself on IPO, with c£286m received by selling shareholders, principally founder and CEO Mark Radcliffe (£212m) and his brother Neil (£42m), who is Product Director. While Mark Radcliffe remains the largest shareholder with a 45% stake, that was a material sell down and the shares currently sit 60% below the IPO price.

At the time of writing, 6 more companies have joined AIM in December, with the shares of 3 currently above the IPO price.