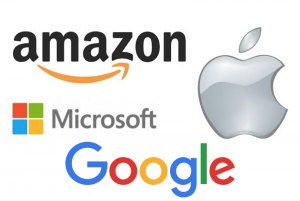 Having bounced strongly off lows, we are somewhat reassured that stock markets closed the week in more sceptical territory with some semblance of a return to normality as trade tensions between the US and China resurfaced, if one calls that normality. It was a big week of earnings announcements from the major technology groups, several of which are held in Fundamental Bespoke portfolios

The week saw US listed Gilead Sciences (US:NSQ) on this occasion offer encouragement, after a trial found that its antiviral drug Remdesivir hastened patients’ recovery from coronavirus, pushing its shares back close to year highs.

While Microsoft (US:MSFT), a long standing holding of Fundamental Bespoke Portfolios, continued to impress with strong growth in sales and earnings, quarterly earnings from Amazon.com (US: AMZN) disappointed, pushing the shares lower, although that is after hitting all-time highs on the last day of April.

Despite reporting revenue up 26% to $75.5bn, Amazon’s profit fell 29% to $2.5 billion, well short of consensus estimates of $3.26 billion, as the online giant struggled to fulfil customer’s orders and incurred higher costs in trying to do so. We sympathise that the company was in a ‘no win’ situation, as it would probably have been accused of profiteering if profits had been better. We think Amazon should be commended for its excellent service in such difficult circumstances.

Founder Jeff Bezos commented that in the second quarter Amazon intends to spend $4 billion or more, the entirety of the quarter’s operating profit, on Covid-19 related expenses, getting products to customers and keeping its employees safe, including its own Covid-19 testing systems.

Apple (US: AAPL) surprised with top line revenue growing 1% to $58.3 billion, ahead of revised expectations, but its profit fell 3% to $11.25 billion, or $2.55 a share.  Apple’s services and wearables business, which include App Store sales and the now ubiquitous AirPods, saw sales rise 18% to $19.63bn, while sales of legacy products like the iPhone, iPad and Mac, fell 7% to $38.68 billion.

Apple said it would add a whopping $50 billion to its share-buyback program and also approved a 6% increase in its quarterly dividend to 82 cents a share. Despite the challenging environment Apple continues to generate mountains of cash. An operating cash inflow of $13.3 billion in the quarter helped lift quarter end net cash to $83 billion, this after spending $46.2 billion on dividends and share buy backs.

Facebook (US:FB) also impressed with its quarterly numbers. Advertising revenue grew 17% to $17.4 billion with daily active users up to 1.73 billion, representing the largest sequential increase since the first quarter of 2017. However, Facebook noted that advertising revenue in the first three weeks of April was flat against prior year numbers and, with small businesses comprising 30% to 40% of its overall advertising base, there could be struggles ahead. Pre-tax income for the quarter grew 68% to $5.8 billion, representing an operating margin of 33%, with period end cash $60.29 billion.

Earlier in the week Google’s parent Alphabet Inc (US:GOOG) reported total revenue in the first quarter of $41.2bn, up 13% and ahead of consensus expectations of $40.8bn, with operating profit up 21% to $8bn. Advertising revenue through its YouTube division rose 33% to $4bn as it attracted a growing number of viewers in lock-down. The major impact of Covid-19 will clearly be felt in the second quarter and Alphabet management cautioned that March produced “a significant and sudden slowdown in ad revenues.”

Alphabet shares are currently down 12% from February highs and trade at 25x forecast earnings for 2021. That doesn’t look bad value relative to many other lesser groups, especially considering $112 billion of net cash.

Quartix Holdings (LON:QTX), the leading provider of subscription-based vehicle tracking systems and a constituent of our AIM portfolios, was swift to react to the pandemic and provided another honest assessment of things. The group remains well-funded and revenue is underpinned by a subscription base of more than 150,000 commercial vehicles, a large element of which is recurring in nature.

Have an excellent weekend