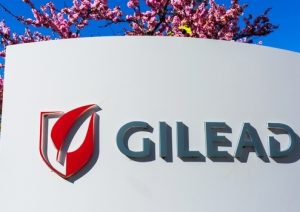 As another turbulent week came to a close, stock markets were lifted by news that a drug developed by US listed biopharma group Gilead Sciences (US: GILD) may be showing promise as a Covid-19 treatment.

Of 125 patients recruited by the University of Chicago for Phase 3 Trials taking Gilead’s drug remdesivir, of which 113 cases were considered severe, most have been discharged, according to a report from STAT News. Gilead cautioned how anecdotal reports, while encouraging, do not provide the statistical power necessary to determine the safety and efficacy profile of remdesivir as a treatment for COVID-19. It expects data from the trials to be available at the end of April, with additional data from other studies coming in May.

Earlier in the week smaller US listed biotech company Moderna (US:MRNA) also encouraged with news of promising early data from a Phase 1 trial of its experimental Zika vaccine, which could be a good sign for its Covid-19 vaccine, currently in Phase 1 trials.

Here is a summary of news over the past two weeks from some of the other companies we follow, many of which are holdings in our AIM and Bespoke client portfolios.

London’s growth market AIM experienced a 20% decline in market value in March falling to levels last seen during the financial crisis years of 2008/09. At the end of the month there were 843 companies on AIM, with its total market value of £74.3bn some 21% lower than the value at the end of February. Restructuring and corporate finance specialist FRP Advisory Group (AIM:LON) was the sole AIM newcomer in the month and it certainly joins at a time when its services should be in high demand.

Our latest quarterly update covering the performance of Fundamental AIM portfolios during a torrid quarter for equities can be downloaded from our Publications page here.

Even accounting software group Sage (LON:SGE) has suggested that it is likely to be impacted by the current crisis alluding to a potential slowdown in new sales. Up to now the group’s business operations have continued with minimal disruption and with cash continuing to flow it looks in much better shape than many. Sage is a constituent of Fundamental general portfolios.

Online spread betting group Plus500 Group (LON:PLUS) splits opinion among investors, but there is no doubting its dividend appeal, which is receiving an extra boost in the current climate. For the three months ending 31 March 2020, group revenue rose an eye-popping 487% to $316.6m due to the increased volatility across global financial markets. The group reiterated its policy to return at least 60% of net profits to shareholders, through a combination of dividends and share buybacks.

British video game developer Codemasters Group (LON:CDM), which specialises in high quality racing games, issued a positive trading update for its financial year ended 31 March 2020. The COVID-19 pandemic has seen an acceleration in the move of the group’s games to digital downloads which has also contributed to higher margins.

The share price of HomeServe (LON:HSV), the international home repairs and improvements business, has bounced strongly over the past few weeks and the latest update was characteristically reassuring with all group companies continuing to respond to emergency repair requests from customers in all the countries where it operates. At the current share price of 1107p, Homeserve shares trade at a heady 25x forecast earnings for the year ending March 2021. This is an excellent business, with evident defensive attributes, but there is surely better value around.

With its entire estate of 787 cinemas in 10 countries closed as a result of the pandemic, these are desperate times for leading cinema operator, Cineworld (LON:CINE). The $7.6bn of net debt the group carried at the December 2019 year-end, suggests a major re-financing will be required. The shares have fallen 80% from the highs of May 2019 an could be tempting recovery play for the brave.

WH Smith (LON:SMWH), which had been delivering consistently excellent returns until the pandemic brought its business to a standstill, found plenty of willing support for its fund raise, securing £165.9m at 1,050 pence per share, a modest 4.0% discount to the closing price the day before. Directors showed commitment, acquiring in aggregate £475k of shares in the placing. Fundamental portfolios hold shares in WH Smith.

Specialist credit hire and legal services provider, Anexo Group (LON: ANX) has drawn attention to a preliminary judgment announced on 6 April 2020 in the High Court of Justice regarding the class action against Volkswagen AG, which could be very good news for Anexo. The judgment ruled that VW group subverted key air pollution tests by using special software to reduce emissions of nitrous oxides under test conditions. A specialist team within Anexo’s legal services division is currently acting on behalf of a large number of individuals who have registered their intention to pursue a claim against VW. Our associates Investor’s Champion covered the announcement in more detail here.

Online wine retailer Naked Wines (LON:WINE), which sold its Majestic Wine business last year, announced higher levels of demand in all of their markets, but particularly in the US. Thankfully, following the sale of the Majestic business, Naked is well-funded, with over £50m of cash and no debt at 31 March 2020. Perhaps its time has come during this challenging period and the shares have certainly performed strongly over the past few weeks.

In an open letter to shareholders, stockbroker Jarvis Securities (LON:JIM) reassured that it is business as usual. The group has benefited from a marked increase in trade volumes following the election result in December and due to the recent heightened market volatility. There was further reassurance of its intention to pay a second interim dividend in June 2020. Full year forecasts for the year ending December 2020 are a dividend of 27.8p, which equates to a seemingly reliable yield of 6.4% at the current share price. Fundamental AIM portfolios hold shares in Jarvis.

dotdigital Group’s (LON: DOTD) business model should be standing up better than most and the customer engagement platform, a mainstay of Fundamental AIM portfolios, is predicting only a slight softening of revenue this year, with earnings and cash for the full year to 30 June 2020 anticipated to be in line with forecasts. With 90% of revenues recurring, no client representing more than 1.5% of revenue and cash of £22.0m at the end of March, the group remains in decent shape to weather the crisis.

SIMEC Atlantis Energy (LON:SAE), the global developer, owner and operator of sustainable energy projects, has seen minimal disruption to its tidal business with its flagship MeyGen tidal project in Scotland continuing to export power reliably to the grid.

Just before the Easter break, Abcam (AIM: ABC), the global leader in the supply of life science research tools, announced it had raised £110m at 1100 pence per share. The Cambridge based business, which supports two-thirds of the world’s 750,000 life science researchers with its antibodies, reagents, biomarkers and assays, is one of AIM’s largest companies and a long term holding in Fundamental AIM portfolios.

Apple Inc. (US:AAPL), a holding in Fundamental general portfolios, has launched a smaller, lower-priced iPhone SE to tempt customers. This is a radically different move for Apple, befitting the more challenging economic climate, as the technology giant has previously focused on launching more advanced products at higher prices to compensate for shrinking unit sales. With many customers preferring a smaller phone, it could prove a successful move to help reinvigorate iPhone sales and further boost the sale of apps and cloud storage.